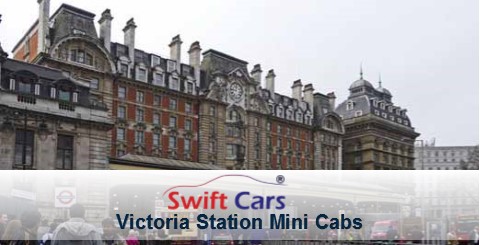 Swift Cars London minicabs are always near Victoria Station. Swift Cars Victoria Station minicabs are the most convenient way to travel in the area, allowing a low cost transport to and from Victoria Underground Station, Victoria Train Station, Victoria Coach Station, neighbouring Mayfair, Pimlico, Westminster, Marylebone, Covent Garden, Paddington and Bayswater. Oxford Street and Soho can be reached within 10 minutes from this station in one of our minicabs.

London Victoria station, generally known as Victoria, is a central London railway hub and London Underground complex named after nearby Victoria Street. The area around the station is an important interchange for other forms of transport: Swift Cars minicabs, a local bus station and Victoria Coach Station for long-distance road coaches is nearby.

Swift Cars also provides cheap minicabs in The Victoria Coach Station, which is the largest coach station in London. It serves long distance coach services and is also the departure point for many countryside coach tours originating from London. It should not be confused with the nearby Green Line Coach Station or the Victoria bus station, which serves London Buses.

Victoria Station minicabs can be booked on the phone: 02073283333, online or on the latest Swift Cars minicab Mobile App available to download for free from the App Store and Play Store.