Book and track your car online 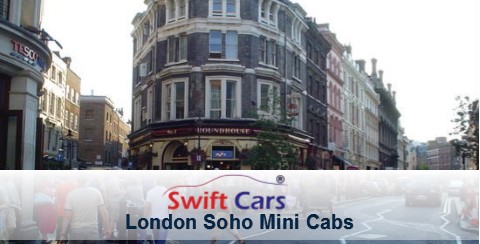 Swift Cars London minicab are always in the heart of Soho. Swift Cars Soho Minicabs are the fastest way to travel in the area, allowing a low cost transport to and from Soho, Marylebone, Chinatown, neighbouring Mayfair, Marylebone, Covent Garden, Paddington and Bayswater.

Swift Cars also provides minicabs in Chinatown. Chinatown, which is off Shaftesbury Avenue. It used to be a regular Soho area, run-down, with Gerrard Street the main thoroughfare. It was dominated by the Post Office, facing Macclesfield Street, and other major establishments were The Tailor & Cutter House, at 43/44, now a Chinese supermarket and restaurant, the Boulougne Restaurant, near the Wardour Street end, and by Peter Mario’s Restaurant at the other end.

Soho minicabs can be booked on the phone: 02073283333, online or on the updated Swift Cars minicab Mobile App available to download for free from the App Store and the Play Store.