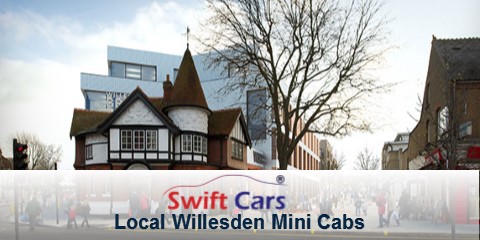 New increased availability in Willesden means you can get car within minutes even during busy London peak times.

Minicabs in Willesden and Willesden Green are now available with Swift Cars Minicabs. You can now have a 5 star minicab for the price of of your local cab company. Swift Cars London Minicab office is based only minutes away from Willesden Town Centre. Swift Cars Minicabs are the best way to travel in the area, allowing a low cost transport to neighbouring Finchley Central, Kilburn, Swiss Cottage, Maida Vale, Notting Hill, Ladbroke Grove, St. Johns Wood, Harlesden, Cricklewood and Brent Cross Shopping Centre that can be reached in minutes. Willesden is an area in North West London which forms part of the London Borough of Brent and is well covered by Swift Cars Minicabs. The area is mostly in the NW10 postcode district, but partly also falls on the NW2 postcode district. Dollis Hill is also sometimes referred as being part of Willesden. Local minicabs in Willesden are very cheap with fares starting at only £5.

The nearest station is Willesden Green. The railways were instrumental in developing Willesden from a village to a busy part of London. Willesden Green station was opened in 1879 by the Metropolitan Railway and has a stunning 1920s facade. Jubilee Line has gone a major refurbishment over the years 2010-2014 and is currently a very reliable transport link between Willesden and Central London. Dollis Hill station and Neasden station, are also within walking distance for some Willesden residents.

Willesden is connected to many places as the A41/A5 road runs close by in nearby Kilburn/Cricklewood. For example a minicab from Willesden Green Station to Cricklewood Broadways is only £5. The North Circular Road, the inner orbital road of London, is nearby running through Neasden. There is a London Black Taxi Service available in Willesden, but it’s much more expensive than Swift Cars minicabs.

A large Willesden bus garage was built over 100 years ago and nowadays many bus routes start or run through Willesden High Road.

Willesden NW10 and NW2 minicabs can be booked on the phone: 02073283333, online or through our latest Swift Cars Minicab Mobile App available to download for free from the App Store and Play Store.