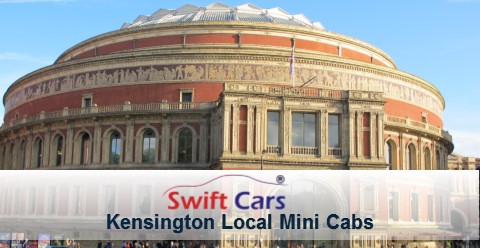 Swift Cars London Minicabs office is based only minutes away from Kensington. Swift Cars are up to half the price of Kensington taxi and are the best way to travel in the area, allowing a low cost transport to and from Kensington, Kensington High Street, neighbouring Knightsbridge, Westminster, Marylebone, Chelsea, Paddington and Bayswater.

The focus of the area is Kensington High Street, a busy commercial centre with many shops, typically upmarket. The street was declared London’s second best shopping street in February 2005 thanks to its range and number of shops. Kensington’s second activity centre is South Kensington, where a variety of small shops are clustered close to South Kensington tube station. This is also the southern end of Exhibition Road, the thoroughfare that serves the area’s museums and educational institutions. Swift Cars Kensington minicabs can collect you from Kensington High Street within 10 minutes. Kensington is crossed east-west by three main roads, the most important of which is the A4 or Cromwell Road, which connects it to both Central London and Heathrow Airport.

Kensington minicabs, cheaper than taxi can be booked on the phone: 02073283333, online or on the latest Swift Cars Minicab Mobile App available to download for free from the App Store and Play Store.